The gastronomy of Rio de Janeiro is packed with intense flavors, spices and variety; a perfect illustration of the city’s rich history. The local dishes are mainly influenced by the Portuguese colonizers and the African slaves who arrived in the city from the late 17th century. 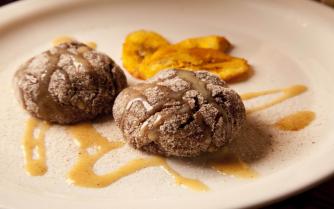 At the Espírito Santa head chef Natacha Fink creates Brazilian cuisine with an Amazonian twist, inspired by her Amazonian roots. The menu features adventurous flavors, and great attention to detail. The signature starter is the tambaqui (a popular Amazonian fish) lightly breaded and served with a pesto of jambu herbs. The Espírito Santa is housed in a 19th century building sitting right beside the tram line, just outside the busy streets of the neighborhood’s many bars and galleries. Perched on a hill, the restaurant provides impressive views overlooking Santa Teresa.